Bangalow Tennis Courts were constructed in 1986 by a dedicated group of locals, with Brian Mackney at the helm, as Vice-President of the Sports Association.  In fact, the courts are named after Brian.  Initially three concrete courts with lighting and grass surrounds, were built on land donated by the Bangalow Bowling Club.  A small club building, consisting of toilets, a store-room and a small viewing shelter with tea-making facilities, was also provided.  Funding for the courts came from a Community Employment Program grant similar to the current “Work-For-the-Dole” Scheme.

The concrete was all hand-mixed in a concrete mixer attached to the rear of the Sports Association tractor, used elsewhere for mowing the fields.  The construction team consisted of hard-working individuals comprising three men and three women, all employed under the CEP Scheme, with Brian as Project Manager.  In time, the concrete and grass surfaces proved impractical, particularly in wet weather, so around the mid-1990’s the courts were re-surfaced using synthetic grass.  At a later stage the clubhouse was slightly expanded to the size it is today.  The club has provided both members and casual users with a venue to play tennis and socialise over the years.

In 2018 a new committee was formed and shortly after that a new coach, Brandon Rowe, was appointed.  Since that time, under Brandon’s guidance, there are weekly coaching sessions for juniors and several teams competing in junior competitions in the area.

Bangalow Tennis Club has several social tennis groups open to members.  On Tuesday morning there is a well-supported ladies’ group, on Tuesday evening a mixed group and on Thursday evening another mixed group.  All members are welcome. 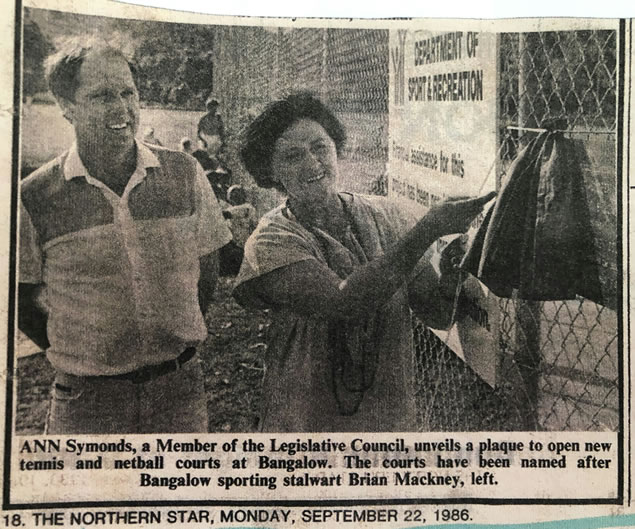 Get in touch today!